Implementation of my ImagineIT project has finally begun.  After some hemming and hawing about the best way to begin, I finally decided to just go for it and see where it takes me.
Since much of the project involves looking at media through a mathematical lens, I first asked my students to take a mini field trip around the school and playground to take photos of things they encounter everyday, but this time trying to see certain letters of the alphabet.  (This is the same activity our cohort did this summer).  I assigned each student a letter of the word "ALGEBRA."  They were to take 3 photos and upload them to their shared google folder.
After completion of this task, students were to share their favorite photo of the three with a group leader who would compose the letters to form the word "ALGEBRA."  One such completed project is here below:
The photo included in the guide was chosen because I felt it can be easily translated from a mathematical concept from the first chapter of our Algebra books (CME Project Algebra 1).  The title of the chapter is "From Arithmetic to Algebra."  Students were asked to submit a photo, video or audio clip that reflects any topic from this first chapter.
After Round 1.  (Technically, Round 1 is still in progress due to some feedback I gave to students and a few missing submissions.)
It was very interesting to see what students' ideas were of this project.  Also, some mathematical misconceptions came to light as well.  A pair of samples of student work will follow.  I am in the process of deciding whether some submissions are too simplistic or is that simply a product of the topic choices to start the chapter.  To be continued..... 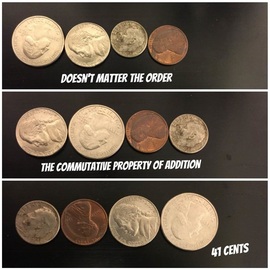 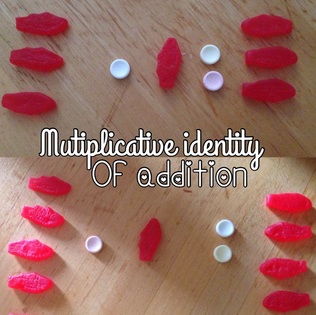 A recurring theme that keeps popping up in my head is “Everything is a work in progress.”   Since I have begun implementing my ImagineIT project, this idea has become increasingly true.  From its initial idea generation phase, to where I am now, to where I’ll be six months from now are probably three very different places.  What I am learning to appreciate is to be okay with unanticipated results and adjusting as necessary.

As I reflected upon potential dilemmas before the implementation of my project, another key concept that arose was to never face a dilemma alone.  Between conferencing with my colleagues, pre-implementation, and talking with students in the focus group, and conferring with my advisor, I was given unique perspectives that otherwise I would be guessing.  Their insight and advice are instrumental to the success of my project.

As for the project itself, I am finding that some students are quickly grasping the idea of taking a visual image and “making math” out of it.  I am wondering if the fact that I gave some constraints as far as mathematical topics helped or hurt them.  My idea was that if there was no focus whatsoever, their entries would be all over the place.  Moving forward, I will still provide some parameters, keeping in mind that the possibilities for images are limitless.

Some students seem to need a little support with the idea generation which then leads to difficulty with the mathematical explanations.  Still some are being too literal.  For example, they might show a rectangular object, state its dimensions and then calculate perimeter or area.  For more algebraic type concepts, I try to steer them toward expressions or relational ideas that might work for any situation.  Literal or not, I am confident that their concept of the topic is being greatly reinforced.  As the math deepens as we progress through the year, I am excited to see their ideas that come from visual media.  It is my hope that when standardized testing comes around, their hard work and thought will pay off.
​
Moving forward, I will continue to monitor/evaluate and provide feedback as students add to their digital portfolios.  I will have a better idea of the overall project when it is complete.  In the meantime, I will encourage creativity and support those students that are having difficulty with the idea and/or the mathematical explanation of their photos.  I usually refer them to the guide, but occasionally additional support is need.   So, in summary, I am not changing anything radically, but anticipate some reflection and tweaks once I have a larger sample of student work to evaluate.